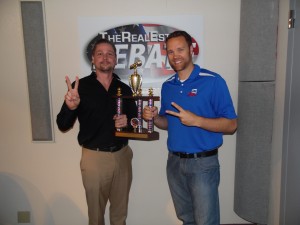 Michael Gaddis, J.D. of Michael Gaddis, J.D. Realty won “The Real Estate Debate” on KFMB 760AM for the 2nd time on March 12, 2015.  Michael Gaddis, a luxury real estate expert specializing in Rancho Santa Fe, Encinitas/Olivenhain and Carlsbad, competed against Nicole Hazelton, Mitch Asa and Mike Althof.  The format of the real estate debate is simple, four real estate professionals are pitted against each other through 4 rounds of competition.  The first round is called rapid fire where each competitor provides a quick comment on a topic chosen by the host, Derrick Evans.  The topic for this competition was “Reasons the San Diego real estate market will be BOOM or BUST in 2015.”  Michael Gaddis’ 3 competitors predicted that the real estate market would be a Boom while Michael Gaddis pointed out that the Feds threat of raising the interest rate in June would affect affordability and could cause a bust.  Michael Gaddis pointed out that the median home price in January for San Diego was $479k and that qualifying for that loan amount would require a very high household income. Eventually San Diego home prices will have to level off because qualifying for loans based on full documentation could be tough for many homeowners.

The second round is called Agree or Disagree.  During this round the contestants are provided a statement and asked to Agree or Disagree.  The statement for this competition was “IN JANUARY, ONLY 74 NEWLY BUILT HOMES SOLD IN SAN DIEGO COUNTY, A RECORD LOW, ACCORDING TO CORELOGIC DATAQUICK STATISTICS GOING BACK TO 1988. This is a major cause for concern for the health of the san diego real estate market…”  All of the contestants disagreed with this statement.  Michael Gaddis disagreed stating that January is a traditionally slow month for home sales in general and also pointed out that new home construction was active throughout North San Diego County.  If builders were concerned with these numbers their continued development of numerous new developments certainly does not demonstrate concern.  The 3rd round of The Real Estate Debate is designed for the contestants to choose a Hot or Not So Hot Market.  Michael Gaddis picked Encinitas, CA and backed it up by stating that the average days on market (DOM) for the 94 closed listings that occurred in Encinitas since January 1, 2015 was only 16 days!  Not only that, but the ratio between list price to sales price was 97% thus proving that houses were not only going into escrow fast but they were selling near asking price.  The final round of the competition allows each contestant to pitch a listing.  The competitors are judged based on their pitch.  Michael Gaddis pitched 15406 El Camino Real in the covenant of Ranch Santa Fe priced at $4.3M.

When all was said and done Michael Gaddis was named the victor claiming his 2nd trophy.   The Real Estate Debate airs on KFMB 760AM on Sundays from 12:00PM to 1:00PM.