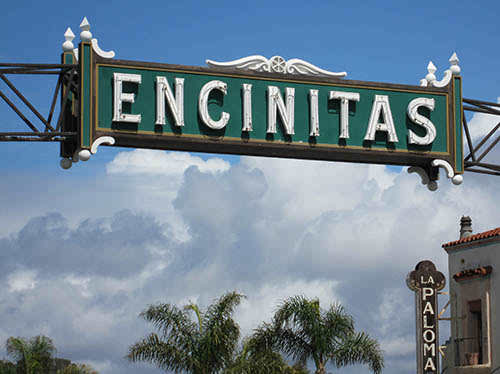 Encinitas is a coastal beach city located in San Diego County 25 miles north of downtown San Diego and 95 miles south of Los Angeles.  Encinitas is located on the Pacific Ocean and neighbored by the City of Carlsbad to the North and Solana Beach to the South and can be divided into 5 distinct areas: Old Encinitas, New Encinitas, Olivenhain, Leucadia and Cardiff-by-the-Sea.

Old Encinitas is the small beachside town with an eclectic mix of business and home styles where visitors are granted by Encinitas welcome arch.  The area is also home to Swami’s, the internationally known surfing spot named after Swami Paramahansa Yogananda the founder of the Self-Realization Fellowship ashram that overlooks the famous reef point.

Olivenhain is a semi-rural community on the Eastern edge of Encinitas creating the Western border for Rancho Santa Fe.  Olivenhain was named by the German immigrants that first settled the area and means “olive grove”.  The land is primarily composed of rolling hills.  The homes located in Olivenhain are upscale and most are located on large lots.  Many of the homeowners of Olivenhain real estate have horse facilities and it is not uncommon to see homeowners riding horses along the many trails.

Leucadia is an older section of Encinitas featuring tree lined streets and boulevards. Located along Highway 101 Leucadia is known for being a surfer town. Leucadia was settled in 1870 by English spiritualists who gave many of the street names after Roman and Greek heroes, gods and goddesses such as Hymettus, Neptune, Phoebe, Europa, Vulcan, Hermes, Cadmus, Diana and Daphne.

The community features art galleries, unusual stores, and restaurants, along with single family homes. The economy of Leucadia prides itself in being made up of mom-and-pop shops, small cafés and boutique stores.  Leucadia definitely has a small town feel and it’s this beach town vibe that attracts so many people to the area.

Cardiff-by-the-Sea is another beach community located within the City of Encinitas.  Despite it being part of Encinitas, Cardiff-by-the-Sea has carved out its own distinct identity.  Cardiff-by-the-Sea with a population of just over 10,000 residents even has its own zip code (92007).  Cardiff-by-the Sea is known for its beautiful beaches and surfing culture.  This coastal haven is also the home of San Elijo State Beach, a popular oceanfront campground.  Cardiff Reef is an area popular with surfers that gnerates magnificent waves for surfers of all experience levels.  If surfing is not for you, during low tide Cardiff Reef is exposed offering locals and tourists alike the enjoyment of the many tide pools with an abundance of sea life.

With its diverse and culture rich communities, great schools, beautiful beaches and desirable location Encinitas is very sought after by home seekers. Thus, it’s extremely important to have an experienced and skilled Realtor working on your behalf.