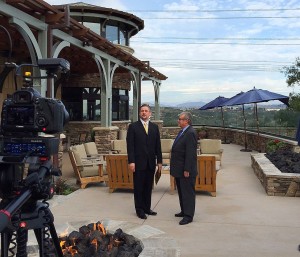 Carlsbad Real Estate Broker, Michael Gaddis, J.D. of Michael Gaddis, J.D. Realty Group interviewed Carlsbad Mayor Matt Hall at The Crossings at Carlsbad Golf Course for his monthly TV segment on “The American Dream.” The production began with Michael Gaddis, J.D. asking Mayor Hall about all of the positive growth that is occuring in Carlsbad including new residential home developments (Toll Brothers at Robertson Ranch, Old Creek Trails by Cornerstone Communities, Casero by Lennar), new commercial developments (new Holiday Inn off of Palomar Airport Road, Via Stat, new commercial buildings on corner of Palomar Airport Road and El Camino Real) and the proposed retail development at the Agua Hedionda Lagoon that promises to bring high end retail shops anchored by Nordstrom to the City of Carlsbad (Caruso Affiliated’s 85/15 Plan) while preserving most of the lagoon for all of Carlsbad to enjoy.

When the interview was over Michael Gaddis, J.D. challenged Mayor Hall and “The American Dream” host Craig Sewing to a one putt “Putt Off.” The challenge was for each to take 1 shot, the closet to the hole would win while the remaining 2 would donate $100 each to the Boys and Girls Club of Carlsbad. 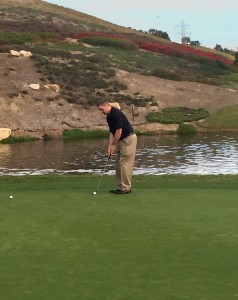 The “Putt Off” was not without friendly controversy as Craig Sewing’s ball hit Mayor Hall’s ball allowing Michael Gaddis, J.D. to win the putt off. It was all in good fun and The Boys and Girls Club of Carlsbad will now receive a $200 donation. 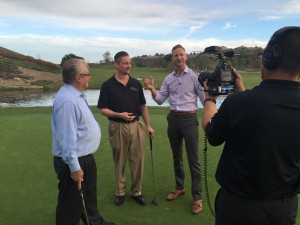 “The American Dream” host Craig Sewing paying up after losing the one shot “Putt Off” at The Crossings at Carlsbad Golf Course.

The balls used for the “Putt Off” were special “Michael Gaddis, J.D. Realty Group” balls. 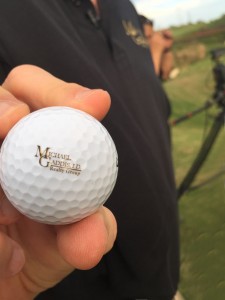 Mayor Hall was incredible. Carlsbad is very lucky to have a mayor like him. The Crossing at Carlsbad Golf Course is AMAZING as well! Michael Gaddis, J.D. has been labeled as an “Elite Triple Threat” by Craig Sewing due to Michael Gaddis, J.D.’s experience as a real estate broker, a licensed CA attorney and a NMLS licensed mortgage Broker. Simply put, it is very difficult to find another real estate professional like him not just in Carlsbad, but all of San Diego.